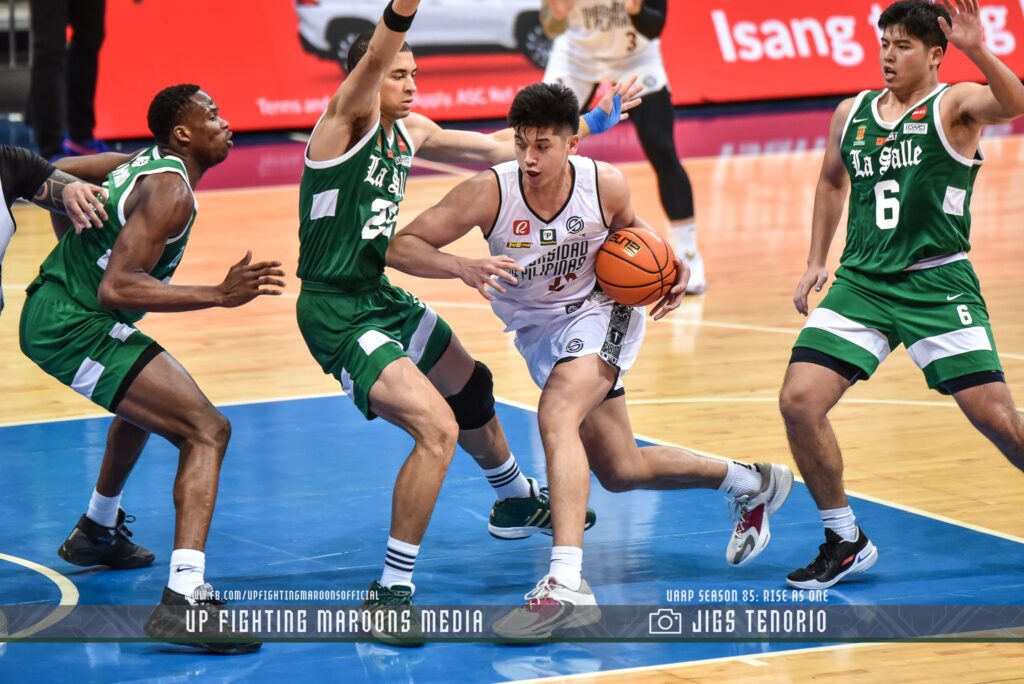 The University of the Philippines Fighting Maroons started their title defense on the right track, defeating the De La Salle University Green Archers in a thriller, 72-69, on Saturday at the Mall of Asia Arena in Pasay City.

It was déjà vu in favor of the Fighting Maroons after another comeback win against the Green Archers, who were taking over for most of the game.

Tied at 57, Brix Ramos completed a trick shot and-one play to push UP ahead by 3, 60-57 at the 6 minute mark of the fourth quarter. That proved to turning point for the Maroons who held the advantage until the final buzzer.

A Carl Tamayo jump shot and James Spencer fastbreak layup gave UP their biggest lead at 6, 70-64, with 16 seconds left.

The Archers showed signs of life from a quick Mike Phillips putback with 12.2 seconds to go, 70-66.

At the other end of the court, the ball slipped from Tamayo’s grasp from an inbound play, resulting to an Evan Nelle triple, 70-69.

With 4 seconds left, Tamayo was fouled but calmly sank 2/2 on the line. The Archers failed to put up a shot as Nelle lost control of the ball.

Carl Tamayo anchored the Fighting Maroons with his 18 points 19 rebounds, 2 assists, and 2 steals. Terrence Fortea stepped up in JD Cagulangan’s absence, scoring 15 points and 9 assists to make up for his 6 turnovers. Diouf contributed 13 rebounds and 9 points.

The UP Fighting Maroons look to establish a streak against rivals Adamson Soaring Falcons at 1PM, while the DLSU Green Archers aim to bounce back as they face the UST Growling Tigers at 4PM on Wednesday at the Philsports Arena in Pasig City.