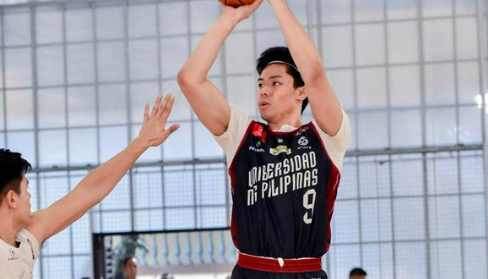 CJ Catapusan of UP Fighting Maroons

CJ Catapusan (Conrad Joey Catapusan) has always been low-key. Even when he had offers to play in the UAAP back then, he chose to bring his talents to University of San Carlos. That time, the UP Fighting Maroons had already set their eyes on him. That’s before he became such a star in the CESAFI, getting a Mythical 5 recognition in just his first year in the Cebu university.

But then, everything changed for CJ Catapusan when he was assured a spot in the Adamson Soaring Falcons in 2018. His role primarily revolves on backing up Sean Manganti and Jerrick Ahanmisi, Adamson’s stars. In the off-season tournaments, he showed a lot of might and a lot of people expected he will be a key cog in Adamson’s campaign for UAAP Season 81.

In their first game of the season, CJ Catapusan was utilized heavily. His solid defense helped lock a surprise win against that season’s champions, the Ateneo Blue Eagles. That season, Catapusan saw just 10 minutes per outing and averaging a mere 2.4 points and 1.6 rebounds per game. Each game,  he continued to get less and less minutes so he has decided to change gears and transfer to the UP Fighting Maroons.

In one of his interviews, Catapusan stresses:“I really did not know why they wouldn’t utilize me over there. Sayang lang if I would stay there and they still wouldn’t use me. I think it would be better if I go to a team where they want me to play,” said Catapusan, the Cesafi’s Mythical Five player in 2016 leading the University of San Carlos to the finals.

The 6’3″ forward also said his parents wanted him to earn a diploma from the premier university in the Philippines. Asked about his experience with the UP Fighting Maroons, where he’ll follow the footsteps of other Cebuano standouts – Paul Desiderio, Janjan Jaboneta, Pio Longa and Jun Manzo, he said:

“It feels great, feels like home since the coaches are great and helpful. I also have teammates here who I am already close with like Jaydee (Tungcab), Pio, Janjan and Jun who are all helping me learn the system.”

Aside from these, CJ Catapusan also hopes to be a part of the legendary legacy team that will bring back the championship to the University of the Philippines.

“It feels like both a privilege and challenge. I must work harder to earn a spot sa roster especially since they already have a very talented team. And of course, it’s a privilege since it’s UP.”

Catapusan has already seen some action for the entire off-season preparations in 2019. He also helped the UP Fighting Maroons and Ricci Rivero in landing a spot in PCCL Final 4.

What can be expected of Catapusan in the next season is his tenacity in the court, a player with both solid offense and defense, high basketball IQ. Athletic and focused, he’s one of the players UP can count as he pours his heart out in every single game. Much like Cebuano Paul Desiderio, Catapusan might just be the heart and soul of the young UP squad this coming UAAP Season 83.

Will we see more of this?