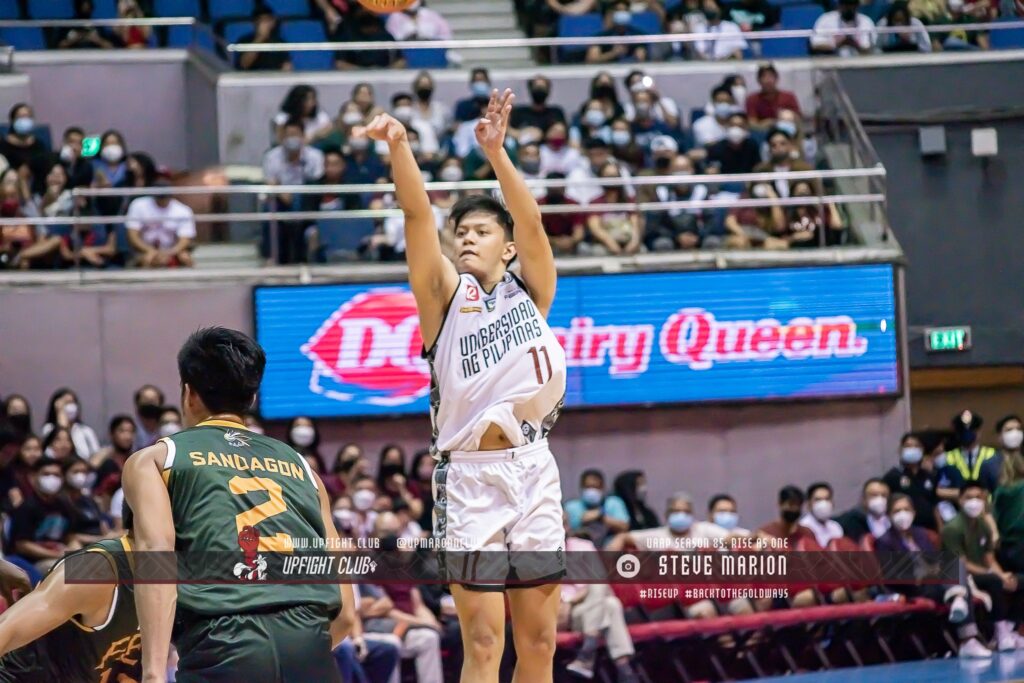 University of the Philippines notched their third straight win in the UAAP Season 85 Men’s Basketball Tournament, after turning back Far Eastern University, 73-67, on Saturday at the Smart Araneta Coliseum in Cubao, Quezon City.

As the scoreboard reads 66-64, Carl Tamayo drills 4 points to counter Cholo Anonuevo’s 1-of-2 free throw conversion for a two possession lead, 70-65, with 2:05 remaining.

Ljay Gonzales made a jumpshot to cut UP’s lead to 3, 70-67, with under a minute to play but Tamayo and Terrence Fortea made a combined 3 out of 4 from the charity stripe down the stretch to prevent an FEU comeback and in turn, lift the squad to a 3-0 record.

The Fighting Maroons had a hot start in the first quarter, 23-10, before crumbling in the second quarter, giving up a one-point deficit for the Tamaraws at halftime, 41-42.

It was a back and forth affair in the second half but Tamayo and Fortea did the damage to keep FEU winless.

Terrence Fortea established his career-high of 17 points on a perfect 5-of-5 shooting from the three point line, along with four rebounds, two assists, and two steals. Carl Tamayo took over once again in the latter part of the game, scoring 8 of his 16 in the final frame. He added six rebounds, three assists, and one steal.

Ximone Sandagon led the Tamaraws with his 20 points on an 8-of-8 field goal clip to go with seven rebounds, one block.

Patrick Sleat had 11 points and 11 rebounds while Gonzales scored 11 as well.

UP is raring to go for a 4-0 slate versus National University at 1PM on Wednesday. Meanwhile, FEU will have another shot to get their first win as they take on Adamson University to close out the matches for the day.